The Cannes Festival of Creativity… – and discussion 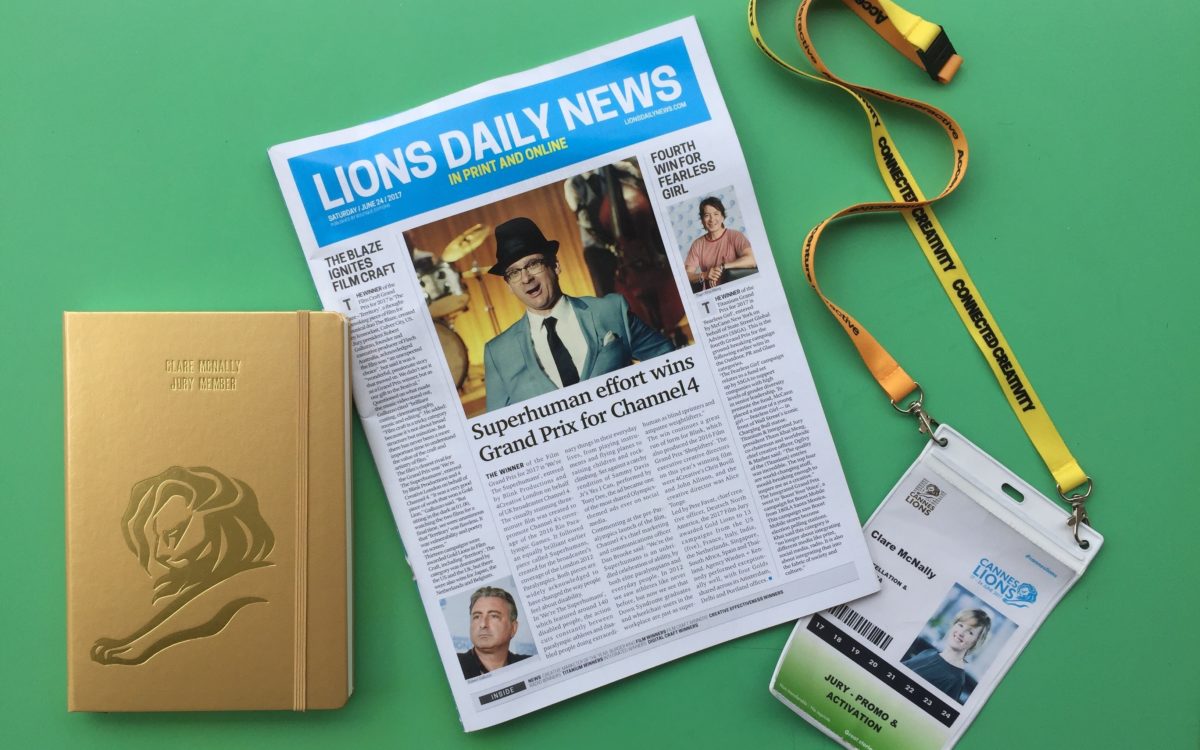 Clare McNally was a juror at this year Cannes Lions festival of creativity and she attended a great deal of the talks and sessions in and around the Palais. In this article McNally lists the 5 most prevalent and important discussions she encountered this year.

I love that Cannes gives us the opportunity to step back from our daily whirlwind of tight budgets and difficult briefs and reflect on our roles as creatives, agencies, brands and people. But what are we actually doing here and can we do it better? Here, I shortlist the top five ‘Cannes debates’ I observed happening in and around the Palais this year. Some are ever-present industry issues, others relatively new. Where do you stand?

I can’t say it better than Eliza Williams from Creative Review, so here goes:

“Like the Oscars, Cannes judges often eschew the more obviously commercially minded work released over the year, in favour of campaigns or projects that show social purpose or include a higher aim than mere selling. This is again strongly evident in this year’s winners, and, despite the desire by some for the industry to move on from this preoccupation, it shows no sign of abating.” (For more brain fodder on this subject, read Nick Asbury’s insightful article “Is this the end for brand purpose?” and see how much fun SNL Live are having at our expense …

It appears the issue of purpose vs. concept has reached its tipping point. It has been brewing for a while as some brands shamelessly trade in emotions and politically correct ideologies in order to have something to say. I saw this in quite a few examples when judging Promo & Activation. Some staid, corporate institutions like banks were randomly piggy-backing ‘hot’ topics like transgender toilets and LGBTQ rights for no particular reason. Skittles, on the other hand, quite ingeniously gave up the rainbow for Gay Pride. They’re a youthful brand that base much of their positioning on the bright, rainbow colours of their candy – and being in the low-interest, FMCG category, they need something visual and fun to stand out. Good on you Skittles!

I also attended a talk with the queue-bait title: “Is the Creative Industry losing its ability to sell stuff?”. One of the speakers, David Kolbusz from Droga5 London made a very valuable point via a relevant comparison of two commercials in the same series for Secret Deoderant. One was, as he put it, “clearly better” in both production and concept than the other, yet the purpose-driven idea was probably perceived as ‘better’. Both have similar viewing numbers. See for yourself …

Personally, I think we should strive to combine purpose and concept. They do not need to be mutually exclusive. Channel 4’s ingenious ‘We’re the superhumans’ is the perfect example of this. A strong purpose. Inspiring idea. Exquisite craft.

The idea of Purpose vs. Concept also ties in to the Rational vs. Emotional advertising debate. Dave Trott laments the loss of product intrinsics in his piece “The ten condiments of advertising”. 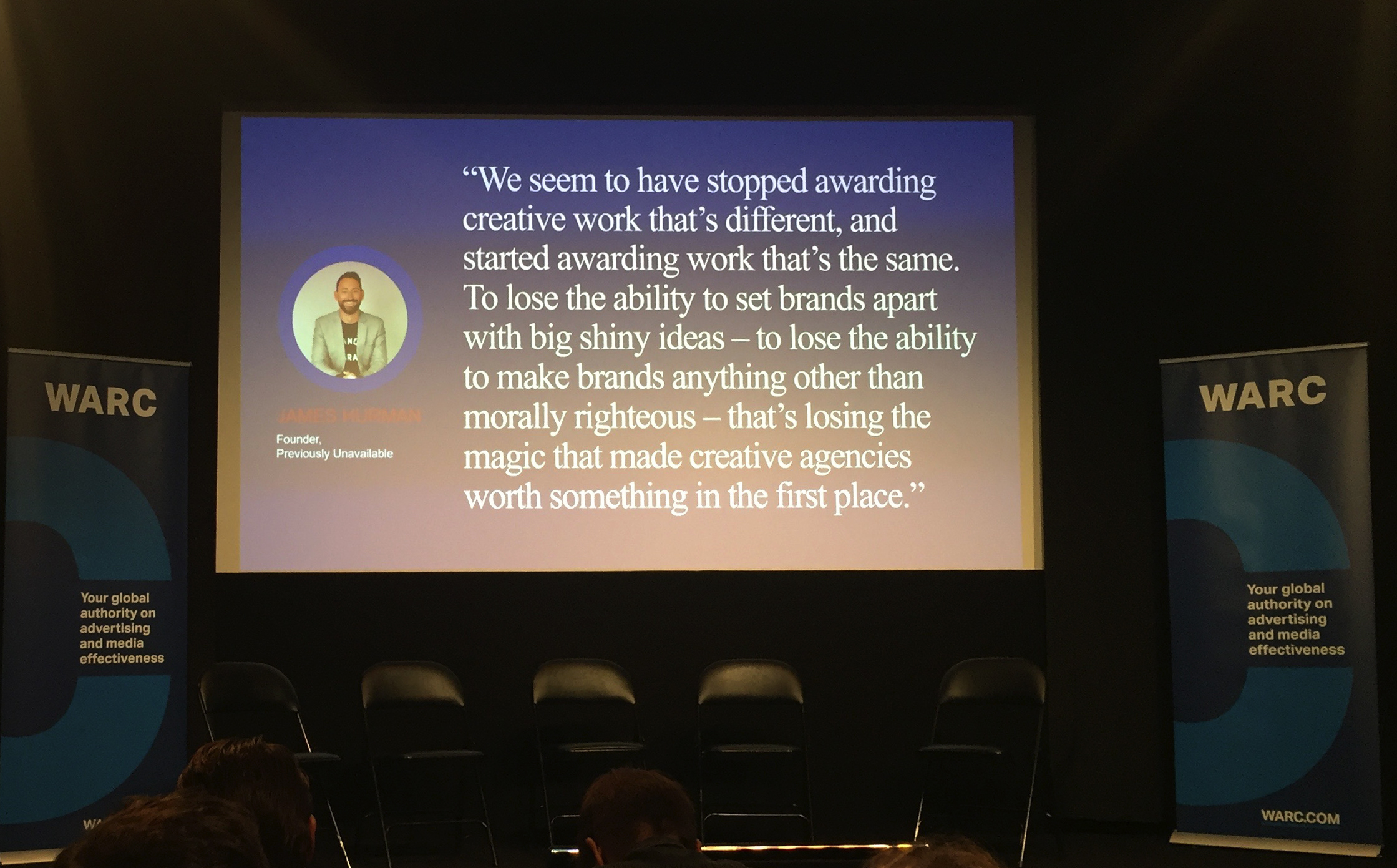 “It’s not hard to envisage a time when the job of discovery,

the job of invention, will be done by the algorithm”

Artificial Intelligence is flourishing. The best talk on this subject, by far, was ‘The cognitive Creativity Playbook’ by Contagious and SapientRazorfish. They concluded that it’s not AI versus humans, but rather AI plus humans. AI allows for data analysis at scale, mimicking the human mind via learning and problem solving. This technology can be harnessed for political agendas, but can also be used creatively as highlighted by Kate Crawford from Microsoft Research in her talk ‘Creativity in the Experience Age’.  Here, she highlighted the app ‘White Collar Crime Zones’ which plays off of predictive policing (which is a real thing). The app shows areas where financial fraud is most likely to occur and sends out warnings when you are close to a crime. 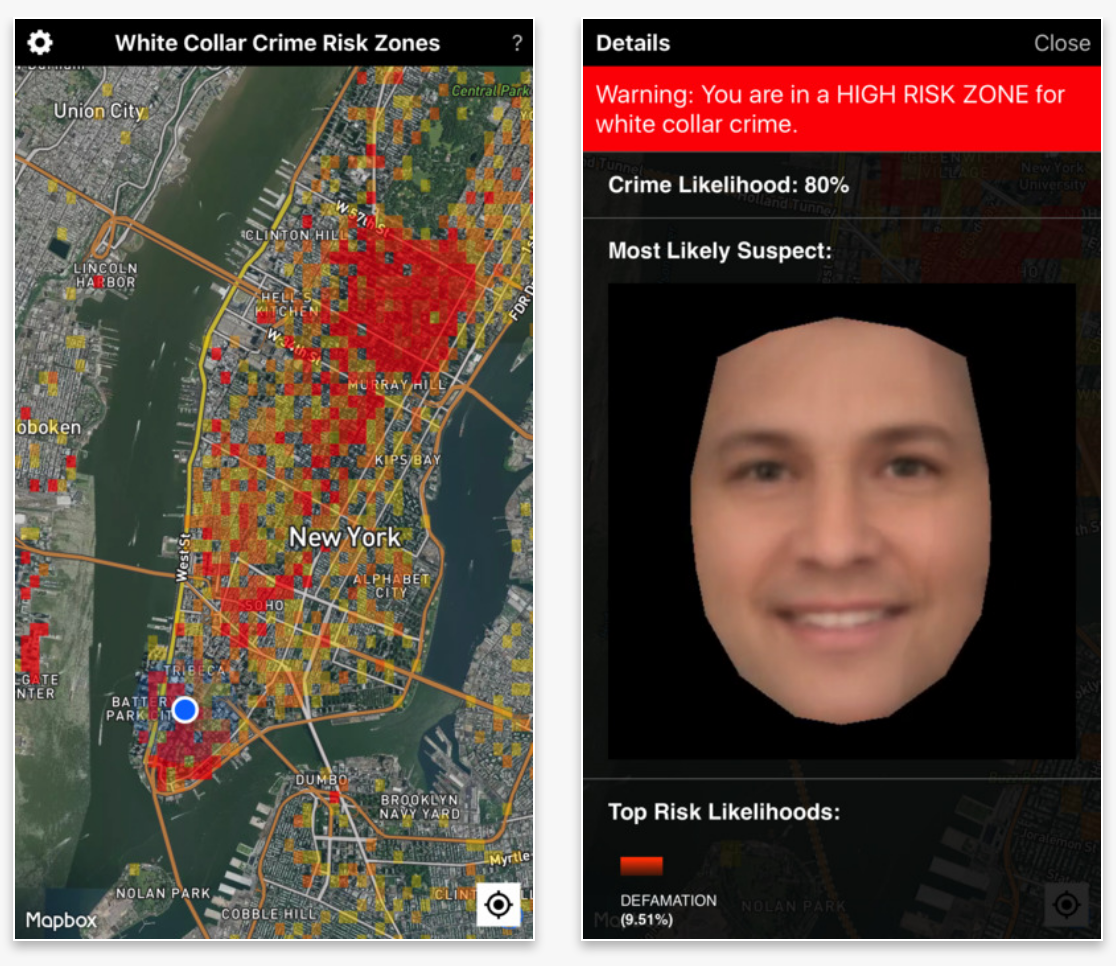 Scary future scenarios were hinted at via platforms such as Scriptbook which tells you whether your movie’s going to be a Hollywood hit or not. (apparently, just 6,2% of films generate a profit). Logojoy is logo creation software that can churn out a logo for just $65 — more like Logohell if you ask me! We’ll just have to be vigilant and trust this slide … 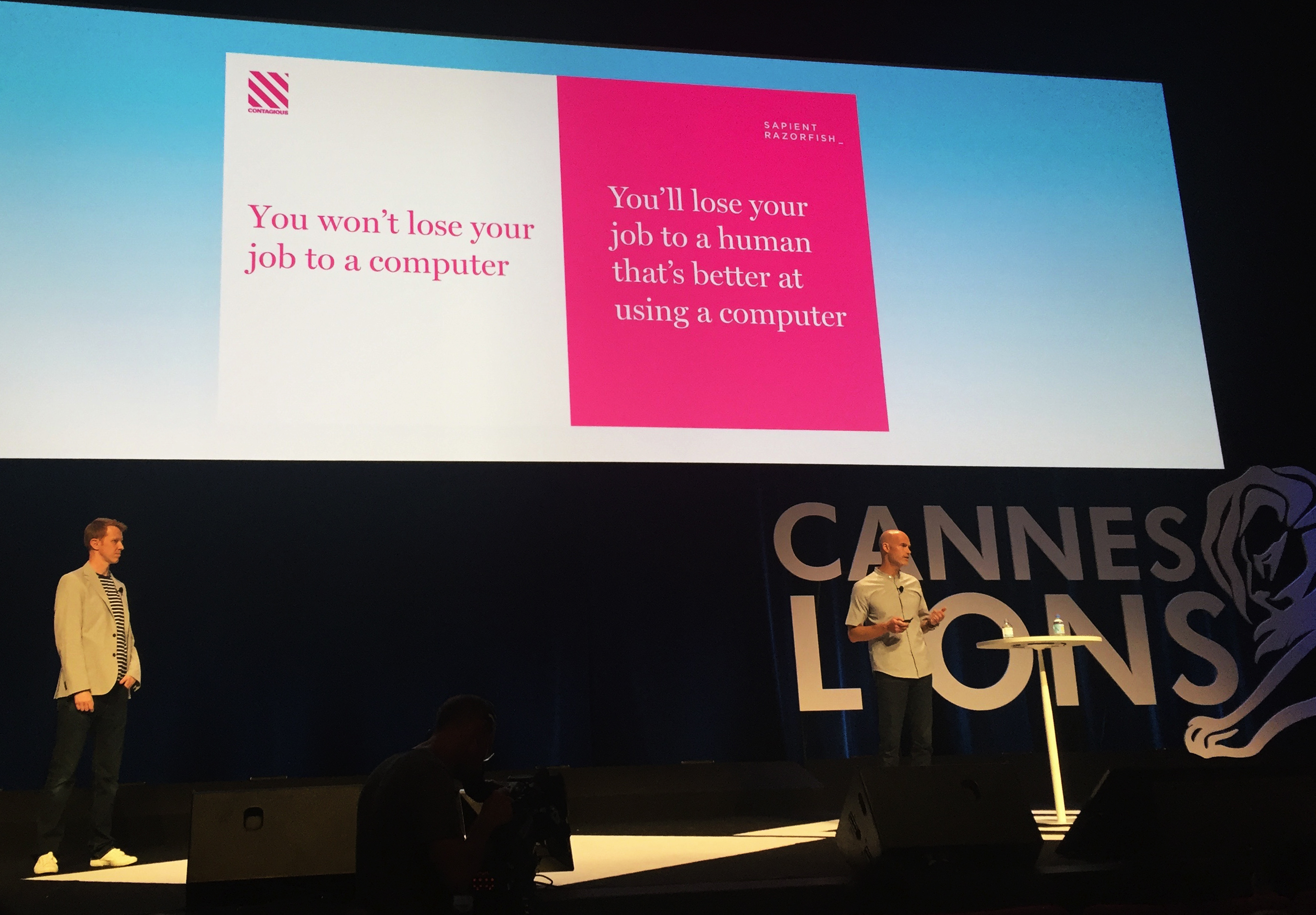 3. Tech vs. Storytelling?
By “tech” I mean technology and/or technique. There seemed to be less technology hype at this year’s Cannes (of course, that could just be my experience). Of course, VR and a lot of other new(ish) ideas and tools were present, but either agencies can not find the right products/clients/budgets to use them just yet or their newness fades incredibly quickly. In terms of technology use, I thought Burger King’s idea for Whopper which forced Google home to advertise its burger via Wikipedia followed a similar kind of construct to Saatchi Copenhagen’s Siri campaign from 2015. Just sayin’.

In terms of technique (a new way to use an existing medium or technology), a great example is Cadbury’s pre-joy campaign from Ogilvy Mather Johannesburg. The pre-roll is seamlessly integrated into the beginning of ‘videos expressing joy’ to cleverly harness a large bank of exisiting films that perfectly capture the brand essence. A genius idea that cost next to nothing.

4. Guts vs. Research?
Pre-research can be valuable and is designed to give clients certainty that a campaign will work. Data analysis should allow for accurate predictions. However, ‘going with your gut’ is still a standard creative principle that is often proven right, especially when it comes to ideas breaking new ground. (The panel pointed out that most of the famous campaigns from the 70’s and 80’s were never tested). During the talk ‘Can’t stop the feeling – A masterclass in emotional advertising’, research got a big slap on the wrist when it was revealed that it indicated that the first Christmas John Lewis TV ad was a definite no go. Luckily the client and creatives trusted their gut and went ahead anyway resulting in annual work that has become part of British culture. See the latestfrom Adam & Eve DDB here …

Researching the effectiveness of campaigns seemed to gain more focus and the IPA was keen to highlight campaigns that won at Effies and Cannes. This is a good thing as it shows our work works. The industry has learned to justify the powerful impact of creativity on sales and perceptions with numbers and stats. John Lewis touted impressive results for its campaigns with 40% of its profits generated over the 5 week Christmas period. Their ROI is currently eight pounds for every one spent.

4. Equality vs. the Olden Days?
I guess this is no longer a debatable issue really. It is clear from Cannes that men and women should be equally represented with this year having the highest ever number of female jurors at 43%. I mention it here, however, as this topic is still very relevant to the Danish industry. Whist I am really pleased that we have had our best year ever at Cannes creatively, it has been rather dismal in terms of creative equality with one of the worst ratios of men to women represented in awards juries, creative departments and industry events. Male and female creatives need to get together and find solutions. Here’s a suggestion from Ireland … 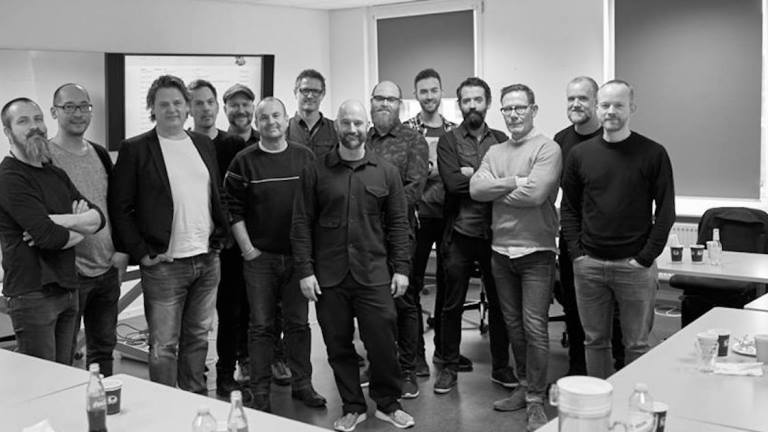 The Females stand out in their absence.

5. Independents vs. Networks?
I attended a meet-up on the Terrace for independents. It was interesting to hear the problems non-network agencies face amidst the tsunami of work entered by networks at Cannes. I heard via the jury grapevine that BBDO had apparently entered something like 300 pieces of work in print alone. Three hundred. In print! Good Lord. That’s over €200.000 worth of entries! Later in the week, Venables Bell & Partners gave a very inspiring talk on the subject of fearlessness in ‘Why Independence is the key to Creativity’. 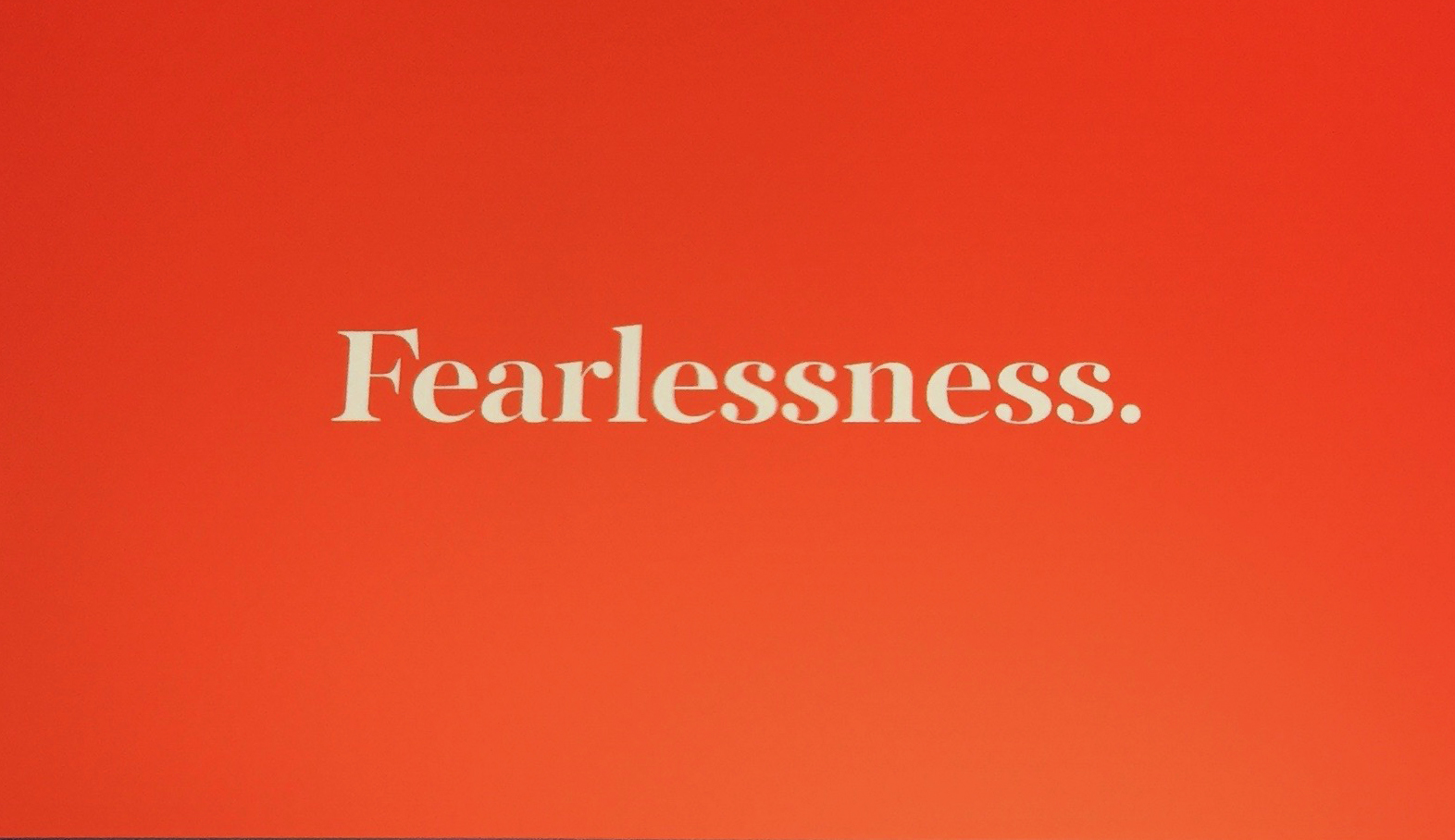 And, for good measure, I’ll add my own debate for 2018 … Cannes Festival of Creativity vs. the D&AD Festival?

I attended both in 2017 and the two events certainly have their differences.

Cannes is a big and brazen week, covering just about everything you can imagine across multiple venues. All industry issues are challenged and discussed in panels and jury talks. This year Publicis’ announcement to withdraw from Cannes 2018, and sir Martin Sorrell’s critique of the event and venue created quite a storm.

D&AD is just three days and was held at the Truman Brewery in London. The schedule felt more focused with each day having a clear theme. There seemed to be more talks on craft with copywriting being a key focus. And the line-up included powerful solo speakers like Piera Luisa Gelardi (ECD & Co-Founder Refinery 29), Vikki Ross (Founder of Copy Cabana), Erik Kessels (Kessels Kramer) and Stefan Sagmeister (Sagmeister & Walsh).

If you have a delegate pass (or have a friend nice enough to give you access) you can view all the Cannes 2017 work and talks here until end July… – spot your own trends, start your own discussions and let’s make 2018 even better!